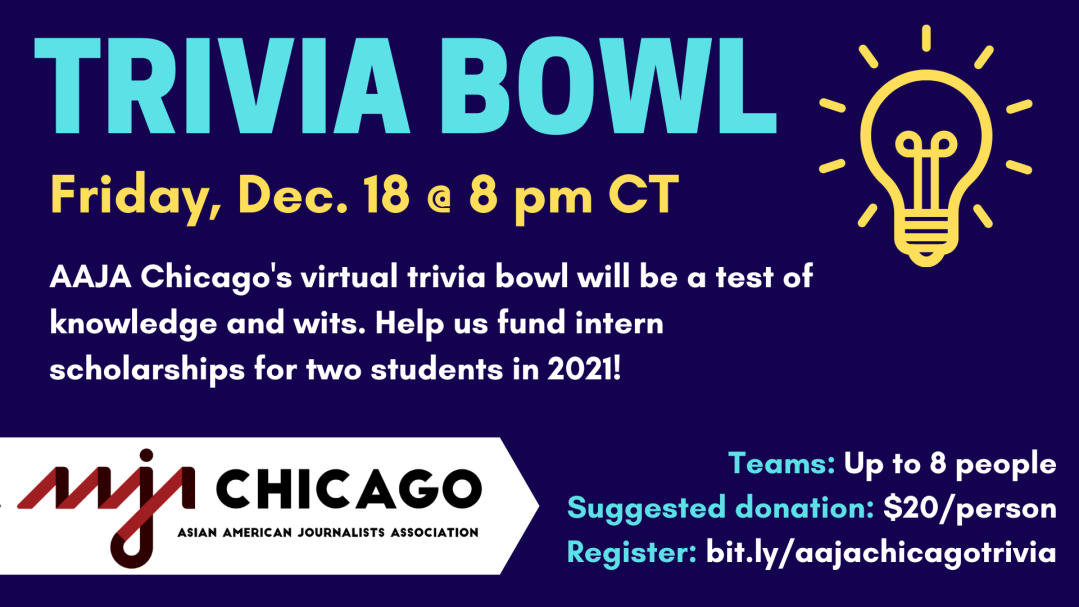 After a multi-year hiatus, the Chicago chapter of the Asian American Journalists Association is thrilled to mark the return of its world-famous annual Trivia Bowl — and this year, for no particular reason whatsoever, we’re going virtual!

Hosted by ESPN reporter and trivia expert Michele Steele, teams of six to eight people will compete in six rounds of trivia, focusing on topics like famous figures in journalism, current events and obscure Chicago history. Whether you’re a group of gumshoes or die-hard fans of razor-sharp trivia questions, put your brains to the test while contributing to a great cause.

If you have a gang of trivia geeks who want to try their hand in this battle royale, you can register as a team with a team name and logo. If you’re a solo rider and are looking to join a group, we’ll set you up.

We know this year has been challenging for so many, and we appreciate that there are only so many dollars to go around. Instead of selling fundraiser tickets like in the past, we’re making this event free with a suggested donation of $20. We hope this will make it easier for more people to participate while still helping our chapter become financially strong and continue our internship program.

For years, the Trivia Bowl served as the chapter’s primary fundraising source for our summer scholarships that support Chicago-area internships at some of our city’s top newsrooms. Over the years, we’ve had college interns pursuing their dreams at the Chicago Sun-Times, Chicago Tribune, Block Club Chicago, Modern Luxury magazines, Telemundo Chicago and several other local TV stations. These vital experiences make it possible for students to build their portfolios, hone their craft and forge connections that will help them launch their careers — all of which are central to AAJA’s mission.

If you have any questions about the event or registration, email us at chicagoaaja@gmail.com.